Kansas, you're taking it in the pocketbook because of your Governor 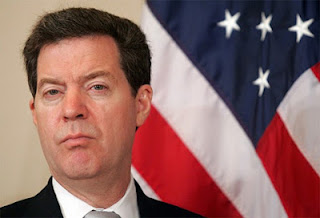 Gov. Brownback is lining up support behind taxing working Kansas families through higher sales taxes so he can pay for even more tax breaks for large corporations and the wealthiest Kansans. And this is after he eliminated the food sales tax credit, increasing taxes on working Kansans and making it harder to raise a family on a modest income.

More importantly, there is this from the Wichita Eagle-Beacon:

Given how strenuously conservative lawmakers and anti-tax groups opposed the statewide sales-tax increase in 2010, it is hard to believe that the Legislature would even consider going back on its word and not allowing the tax to expire on July 1. Yet Gov. Sam Brownback and the Kansas Chamber of Commerce already have flip-flopped; lawmakers may do so, too.

When the Legislature approved the temporary tax increase, conservative lawmakers protested that it would wreck the economic recovery. The Kansas chamber condemned the budget deal as catering “to the needs of those at the government trough,” and it targeted for defeat lawmakers who “voted to impose higher taxes on job creators and families.”

Brownback also criticized the tax increase when he campaigned for governor that year. But after he was elected, he changed his view.

Kansans, you're--we're--being taken for a ride, all so this Governor can, in his hopes, be the next president of these United States.

He need to hear from you and I, from all of us.

Kansans need to vote Republicans out of office at the state level. They simply aren't looking out for ordinary folks. They will seize your government and you'll never get it back without exercising your 2nd amendment rights.

Agreed on the Republicans, voting them out, anyway but 2nd Amenmdment rights?

We have to have a shootout to solve our government and societal problems?

Tell me you're not. Please.