So much to say. Worse, so much to do.

49 years ago today, we had the first Earth Day. People could look around, and they did, to see we had polluted our planet horribly and still were. Rivers were catching fire, literally, from what we poured and dumped into them and our air was filthy. You could not just see it, the air, you could see the filth we dumped and were dumping into that. We called it a nice, polite word we could live with. That is, smog.

So we got smart.

We passed laws, clean air and water laws. We worked together.

Our air is cleaner now than it used to be. Our waterways got cleaner. Rivers stopped catching on fire.

Now, however, there is a man supposed to be leading our nation, he and his political party are taking us backward. They're undoing some of those laws. The old fool wants to take us back to foul, dirty, literally killing coal.  Here are two examples.


Complete Wiping Away of Clean Water Act': Trump EPA Rule Would Free Corporations to Pollute Nation's Water Much as They Please

It's insane, it's certainly irresponsible but it's who he is and what he wants.

We had to fight once for all this and we won. Then, there was the hole in the ozone layer. We learned what the problem was, we fought it, we worked together, we corrected our actions, our production and use of chlorfluorocarbons, CFCs and fixed it.

Now, there is an even bigger problem.

We, as a people, all across the world, are pouring carbon dioxide into the atmosphere, at unheard of rates, with our cars and burning coal, etc., and we're heating up the planet. Nearly all scientists, across the world, agree on this. The data shows we are.

The data also shows the ice caps and glaciers across the planet are melting--and at rapid, unheard of rates--we're experiencing ever-hotter years, year after year, across the globe and we're experiencing destructive, even killing weather events worldwide. From floods to drought to wildfires, we're already there.

But corporations and the political parties they can buy want to derail efforts to move from fossil fuels, toward "green", sustainable energy.

So what this all boils down to is that we must wait this man in the White House out, work against his agenda(s), him and his party, work, fight for clean air and water and soil and not let our guard down.

For a while, with this man in the White House and his political party controlling the Senate, we'll have to fight him and them but fight we must. Fortunately, we have science and data and logic, common sense--and our survival--on our side.

Quote of the Day (Week, Month, Year)-- On Donald Trump


A Facebook friend posted the following quote about Donald Trump and I cannot find a better, more complete, nor more accurate description of the man. 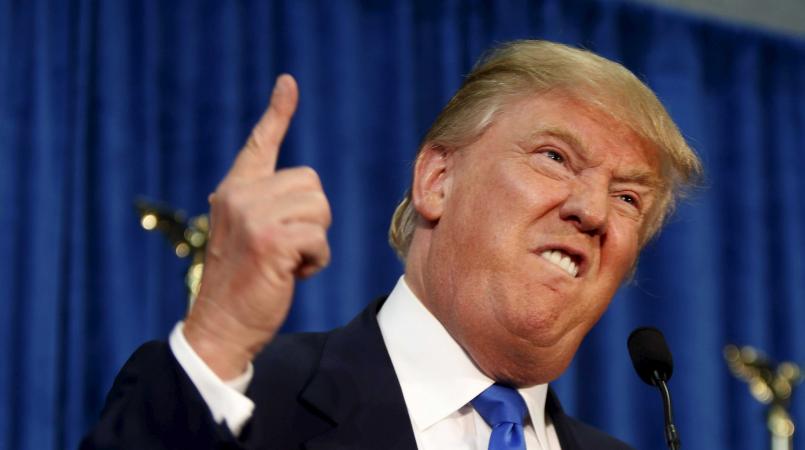 Someone asked "Why do some British people not like Donald Trump?"

Nate White, an articulate and witty writer from England, wrote this magnificent response:

"A few things spring to mind.

For instance, he has no class, no charm, no coolness, no credibility, no compassion, no wit, no warmth, no wisdom, no subtlety, no sensitivity, no self-awareness, no humility, no honour and no grace - all qualities, funnily enough, with which his predecessor Mr. Obama was generously blessed.

So for us, the stark contrast does rather throw Trump’s limitations into embarrassingly sharp relief.

Plus, we like a laugh. And while Trump may be laughable, he has never once said anything wry, witty or even faintly amusing - not once, ever.

I don’t say that rhetorically, I mean it quite literally: not once, not ever. And that fact is particularly disturbing to the British sensibility - for us, to lack humour is almost inhuman.

But with Trump, it’s a fact. He doesn’t even seem to understand what a joke is - his idea of a joke is a crass comment, an illiterate insult, a casual act of cruelty.

Trump is a troll. And like all trolls, he is never funny and he never laughs; he only crows or jeers.

And scarily, he doesn’t just talk in crude, witless insults - he actually thinks in them. His mind is a simple bot-like algorithm of petty prejudices and knee-jerk nastiness.

There is never any under-layer of irony, complexity, nuance or depth. It’s all surface.

Well, we don’t. We see it as having no inner world, no soul.

And in Britain we traditionally side with David, not Goliath. All our heroes are plucky underdogs: Robin Hood, Dick Whittington, Oliver Twist.

Trump is neither plucky, nor an underdog. He is the exact opposite of that.

He’s not even a spoiled rich-boy, or a greedy fat-cat.

He’s more a fat white slug. A Jabba the Hutt of privilege.

And worse, he is that most unforgivable of all things to the British: a bully.

That is, except when he is among bullies; then he suddenly transforms into a snivelling sidekick instead.

There are unspoken rules to this stuff - the Queensberry rules of basic decency - and he breaks them all. He punches downwards - which a gentleman should, would, could never do - and every blow he aims is below the belt. He particularly likes to kick the vulnerable or voiceless - and he kicks them when they are down.

So the fact that a significant minority - perhaps a third - of Americans look at what he does, listen to what he says, and then think 'Yeah, he seems like my kind of guy’ is a matter of some confusion and no little distress to British people, given that:
* Americans are supposed to be nicer than us, and mostly are.
* You don't need a particularly keen eye for detail to spot a few flaws in the man.

This last point is what especially confuses and dismays British people, and many other people too; his faults seem pretty bloody hard to miss.

After all, it’s impossible to read a single tweet, or hear him speak a sentence or two, without staring deep into the abyss. He turns being artless into an art form; he is a Picasso of pettiness; a Shakespeare of shit. His faults are fractal: even his flaws have flaws, and so on ad infinitum.

God knows there have always been stupid people in the world, and plenty of nasty people too. But rarely has stupidity been so nasty, or nastiness so stupid.

In fact, if Frankenstein decided to make a monster assembled entirely from human flaws - he would make a Trump.

And a remorseful Doctor Frankenstein would clutch out big clumpfuls of hair and scream in anguish:

If being a twat was a TV show, Trump would be the boxed set."
Meanwhile, THANKS, REPUBLICANS!

Now get us out of this mess.


I've written about Missouri's sad state of infrastructure here before. Our roads and streets and bridges, not just here in Kansas City but statewide.

It seems clear, with Republican-led government, on the state or national level, either one, we--read: they--just don't want to fund the basics like education or, again, infrastructure. Millions and billions for perpetual war in foreign countries but far too little for our own nation.

So along comes this study: 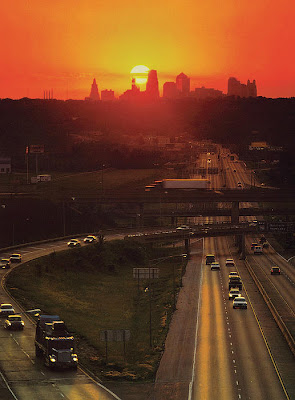 Check out these statistics from the article:

More than 47,000 bridges in the United States are in crucial need of repairs, says the American Road and Transportation Builders Association, or ARTBA. The group, which advocates for investment in transportation infrastructure, analyzes data from the Federal Highway Administration and releases an annual Deficient Bridge report.

This year's report, released Monday and based on 2018 data, found:
Now, check out our own state of Missouri’s ranking in all this.

The states with the highest number of compromised bridges are:

We're one of the worst, one of the top 5 states with bridges in poor repair in the nation.

Meanwhile, this is our current status:

“President Trump has said repeatedly that he wants to upgrade America's crumbling infrastructure. Even though some Democratic leaders have expressed a willingness to work with him on a plan, little progress has been made on the issue.”

We need to demand more, much more from our legislators, in Jefferson City and Washington, both.

We've been in Afghanistan, either blowing things up or building schools for 18 years.

Even Chinese billionaire Jack Ma has pointed this out.

What part of that makes sense?

Let's get back to taking care of the important things.

We can't be strong over there if we're weak over here.

The Big Takeaway From Yesterday's Election


Okay so we got that election out of the way, for better or worse.

Thankfully, we are now down to only two candidates for mayor of Kansas City, Missouri. That trying to weed through a dozen was a bit crazy but hey, this is America. We love choice.

No surprise, I don't think, the vote to possibly help pre-kindergarten with daycare died. Between the fact that even the school district didn't support it and that it was "just one more tax", I can't say I'm surprised it died.

And now we have 2 choices for mayor. The differences couldn't be more stark, could they? Jolie Justus and Quinton Lucas? Yet more of us will have to go out and do some more homework, for those not fully familiar with both.

But here's the big takeaway, the big blessing, for me, anyway, and maybe for a lot of us--the entire city?--after this election.

We likely--hopefully?--don't have to hear from or about Clay Chastain any longer. 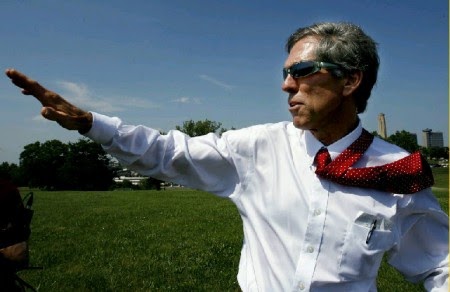 Understand, this is not a post to mock, ridicule or otherwise make fun of Mr. Chastain. Not at all.

We have seen and read and heard so much from and about him over the last several years and it seems he doesn't even really live here.

I get the sense he was sincere and well-meaning, good intentioned with his hopes and plans and dreams and ideas for our city. I'll give him that.

And you shouldn't have what seem to be kooky--or worse--ideas.

As mayor, you would have to lead all of the city. Everyone would have to come along with you. That means being with and behind you on your ideas.

Too often, it seemed Mr. Chastain had his own, very headstrong ideas but that much of the metropolis wasn't with him on them. I could be wrong on this but I don't think so.

So with this, Mr. Chastain, I think it's safe to say, again, for most of the area, maybe thank you for your thoughts and ideas and efforts. Thank you for those intentions. We wish you well.