Posted by Mo Rage at 3:15 PM No comments: Links to this post

Quote of the Day: On Money In Politics

"The money that is spent in elections is absolutely unconscionable - even if it's private money. It's true that one's not corrupted by the expenditure of one's own money, but to some extent the system is. We cannot have a system in which the only people you can count on for a vote that doesn't look as though it might be a vote for a special-interest group are people with enormous fortunes."

KCPT's "Week In Review": "We Got the White People's View Covered!"


First "Ruckus" this week, and now this.

Posted by Mo Rage at 2:30 PM No comments: Links to this post

KCPT's "Ruckus" Back to Exclusion


One woman but not one "person of color", not one person of a minority, again, this week, on KCPT's weekly talk show "Ruckus."

They're all on vacation?

Or do we just really not need to get their input?

They surely have the white person viewpoints covered.

Would exclusion also be considered racism?

Asking for a friend.

They surely like to have minorities in their commercials, asking for money.

The KCPD Is Hurting Itself This Week. Big Time

We’d have been ticketed. On the spot. At the very least.

“Although multiple witnesses and other drivers gave statements to police that were reflected in the crash report, the off-duty officer driving the van did not.

He still had not given a statement to investigators two days later, when Police Chief Rick Smith said he had ‘no idea’ what caused the wreck”

How many things are wrong with this?

“Investigators reported that the off-duty officer showed no evidence of alcohol use.”

Was the officer tested, on the scene or shortly thereafter, for alcohol use? Was he given a breathalyzer? The articles make no mention of it.

Does this not look like the police trying to protect “one of their own”, laws and justice and even common sense, be damned?

If it’s not, explain to us all why it’s not, please.

“Until Thursday,…” (yesterday, Nov 8) “…the Police Department had not released a standard police report from the wreck, even though Missouri law requires it.”

“As in all open investigations where possibility exists for a person to face charges, the identity of that person (is) to be withheld,” Colón said. “We respect the legal process and will honor it by not releasing the officer’s identity until which time is allowable.”

Since the wreck, Chandan’s father and sister have remained hospitalized.

Chandan’s sister Lisa Allen suffered a brain injury and was recently moved to a rehabilitation hospital in Lincoln, Neb.

By contrast and comparison, check out what happens to someone who isn’t a police officer. This posted yesterday.

But he's a regular schlub like you and me.

Posted by Mo Rage at 5:45 PM No comments: Links to this post

Shame On You, Missouri, Missourians


We rejected the gas tax? To fix, improve, repair our roads?

I didn't realize the proposed gas tax that was on the ballot this week failed until today.

The Kansas City Star got it right. 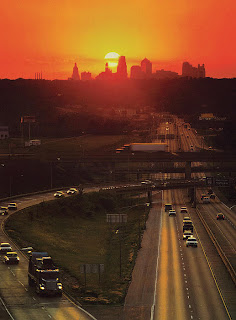 This was the worst mistake Missouri voters made in Tuesday's election

That headline isn't hyperbole, either.

Even in the face of having elected not just Josh Hawley to be our next US Senator, representing the state, and Steve Watkins, too, this is, by far the worst thing for this state, coming out of this election.

Those two are horrible.

Missourians, you cheap so and sos.

Now we're going to get the roads the people who voted this down, deserve.

Links to just some of the facts.

No urgency on I-70 from anywhere


Yessir and ma’am, our Chiefs are getting yet more great press, what with being led by the magic and strength that is and that we get from and with Patrick Mahomes.

What they have to say:

The answer is a resounding yes. It’s also highly unlikely that this second-year quarterback will somehow take a step back in the MVP race Week 10 against a two-win Arizona Cardinals team. We’re honestly just running out of expletives to define what Mahomes has done for the 8-1 Chiefs on the season.

In addition to already breaking multiple records, Mahomes is completing 66 percent of his passes while leading this offense to an average of 36.3 points per game. He’s on pace for 5,400 total yards and 55 total touchdowns. It’s now up to Patrick Peterson and the Cardinals to somehow slow him down at Arrowhead come Sunday. Good luck with that.

GO CHIEFS!!
Posted by Mo Rage at 5:20 PM No comments: Links to this post

Science in Our Upcoming Elections, State by State


Another fascinating article out this week, this one on the national elections, state by state.

The Most Important Science Policy Issue in Every State

Lots of these issues have to do with flooding, wildfires, chemical runoff and corporate farming.

Missouri’s contribution to this is fascinating and at the forefront of an issue and change.

Missouri has become the epicenter of a fracas between meat producers and the burgeoning “fake meat” industry, a market that has jumped 24 percent since 2015. This past May, the legislature passed a bill that bars makers of flesh substitutes from using the word “meat” on their labels. Backed by the Missouri Cattlemen’s Association and pork producers, the bill could stifle growth of a new industry, according to meat substitute producers. Columbia-based Beyond Meat, for instance, could likely have to change its name, and warns that the measure could result in job loss. The company, together with University of Missouri researchers, has developed plant-based burgers, chicken strips, and sausages that closely resemble real meat. Beyond Meat CEO Ethan Brown says the bill would do little to convince consumers to opt for the real thing.

This part is especially interesting.

In late August, vegan food maker Tofurky, along with the Animal Legal Defense Fund and the American Civil Liberties Union of Missouri, filed suit against the state, arguing that the new law stifles free speech and hampers competition.

From Kansas, it’s one more example, and a great one, of why we need newspapers and their reporters. In this, the Wichita Eagle-Beacon came to the rescue.

This past summer, an investigation in the Wichita Eagle newspaper found that hundreds of residents drank and bathed in water fouled with the dry-cleaning chemical perchloroethylene (PCE) for more than six years—and that state officials failed to inform the communities. At one site, PCE levels in the groundwater were 8.1 parts per billion; EPA limit is 5 ppb. As many as 22 other contaminated sites may have gone unaddressed, according to the investigation. A 1995 state law lobbied for by the dry-cleaning industry appears to be largely to blame. The Kansas Drycleaner Environmental Response Act included a provision that directed state regulators to refrain from looking for contamination from dry cleaners and “make every reasonable effort” to keep sites off the EPA’s Superfund list. Residents are calling for the state to scrub up the areas and for lawmakers to strike the part of the legislation that bars checking for PCE leaks in groundwater.

All these, from state to state, point out why we so desperately and completely need government—state and federal both. If we don’t have these governments, there are no ways to keep our air, water and soil clean and clear. Corporations would be able to do whatever they wish, people and animal life be damned.

You might also check out Arkansas, New Mexico, Oklahoma and Virginia and their issues, especially.


Another "clickbait" article out on the interwebs this week. This one is kind of fun.

Coldest Town in Every State

Do you suppose it froze to death?

A polar bear. Of sorts.

New Hampshire is Colebrook. Also mis-named. Should be Coldbrook. Right?

Seems like that should be the warmest place in the state. At least indoors.

Kansas? No surprise. At all. At least no surprise to any of us who've paid attention to the region weather forecasts.

Yoder and Kansas GOP Set For a Fall?


There is a terrific, even hopeful article out this week at The Hill and it has potentially good to great information on Kansas’ House seat.

Yoder is the only member of Kansas's all-Republican congressional delegation seeking reelection in a district won by Clinton in 2016.

What's more, the state's 3rd District includes Kansas City and its surrounding suburbs, making it a prime target for Democrats this year.

Yoder faces a challenge from Democrat Sharice Davids, who, if elected, would be one of the first Native-American women in Congress.

Recent public polls show Davids with a solid lead in the race. A survey released late last month by Emerson College put her ahead of Yoder by 12 points, and The Cook Political Report has for over a month kept the race in the "Lean Democratic" column.

At the same time, the NRCC has drastically scaled back its financial support for Yoder - a sign that the GOP House campaign arm may be losing confidence in his prospects.

I love it, of course.

Take nothing for granted, folks. Get out there this Tuesday and VOTE.

Posted by Mo Rage at 6:00 PM No comments: Links to this post


Yes sir, our own Senate race between Claire McCaskill and Josh Hawley is highlighted in a New York Times YouTube video presently. It asks a great question.

Can Claire McCaskill Hold On to Her Senate Seat in Missouri?


It's not a big surprise they'd cover this and for a couple reasons, at least. First, it's thought to be a close race. Second, it could be pivotal in the Republicans' keeping or losing control of the Senate.

I'll let the video speak for itself.

Get out there Tuesday and vote.

Our WWI Memorial Museum in the NYT


There is a terrific article in last Sunday's New York Times on our own WWI Liberty Memorial Museum.

Somewhat unusually, it's in the annual Fall arts coverage special pullout section of the paper. I would have expected it in the travel section. It's called the Fine Arts & Exhibitions section. That nearly makes it even better.

It's quite good. You might check it out if you haven't already.


(My own photo, above, by the way, from my photography blog: KC Photog Blog. Just saying).

Posted by Mo Rage at 3:05 PM No comments: Links to this post