Yes sir and ma'am, wishing you all a very, very happy Second Impeachment Day! I know it's a great one for me and not just because we have wonderful mild weather here in the Heartland today. 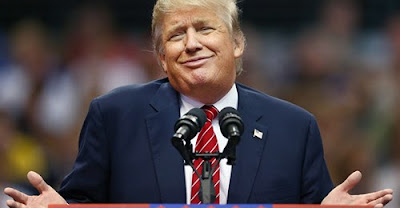 Congress is, at this very moment working on the 2nd impeachment---history making!--of this Republican Party President one Donald J "Jenius" (or is that "The John"?) Trump.  And rightfully so after fomenting his treasonous, traitorous insurrection at our nation's Capitol last week which ended up costing 5 American lives and threatening the lives of our representatives in Congress and their staffs.

So were are we now, today, at this moment? There is nowhere better to look than here to a historian to  give us a summary and put things into clearer perspective.

January 12, 2021 (Tuesday)
The news continues to move at a breathless pace.
After making no comments on the January 6 coup attempt since the day after, when he continued his assault on the validity of the 2020 election, Trump today refused to acknowledge he has done anything wrong. He told reporters his speech to the “Stop the Steal” rally in Washington, D.C., that prompted the assault on the Capitol, was “totally appropriate.” He insisted that “other people” had said that the “real problem” was “the horrible riots in Portland and Seattle and various other places.”
Instead of addressing his role in the crisis, on his way to Alamo, Texas (not The Alamo, which is in San Antonio, Texas, about four hours away from Alamo), Trump blamed the Democrats for attacking him unfairly. He said that the Democrats who were pushing for impeachment were once again on a “witch hunt” that was “causing tremendous danger to our country.”
No one is buying it.

There are three real stories right now with regard to this crisis. The first is that what happened on January 6 when rioters stormed the Capitol, and what led to that attack, is getting clearer, and none of the details are good. The second, and related, story is that the Republicans are splitting, and their leadership is trying desperately to find a way to remain powerful. The third ties the first two together: lawmakers are preparing to throw Trump out of office.

Today the FBI finally briefed the public on the events of January 6. Contradicting reports that said there was no sign of trouble in advance, an FBI official said that on Tuesday, the bureau warned that extremists were going to muster in Washington, D.C., to launch a “war.” Today, the bureau announced 160 case files on the insurrection and said this was just the beginning. Acting U.S. Attorney for the District of Columbia Michael Sherwin said people will be shocked about some of the things that happened inside the Capitol. He also said the Department of Justice is considering filing charges of sedition against some of the riot’s participants.

A separate briefing for House Democratic committee chairs seemed to leave them shaken by the scope of the insurgency. “This was not a peaceful protest that got out of hand,” they said in a statement. “This was an attempted coup to derail our Constitutional process and intimidate our duly elected leaders through violence.” “[W]e have grave concerns about ongoing and violent threats to our democracy. It is clear that more must be done to preempt, penetrate, and prevent deadly and seditious assaults by domestic violent extremists in the days ahead.”

Calls for Trump’s impeachment continue to escalate. Today the New York Times editorial board blamed Trump and his supporters in Congress and in the right-wing media for the Capitol attack, “a crime so brazen that it demands the highest form of accountability that the legislature can deliver.” Perhaps of more interest to Trump’s accomplices is that today Walmart joined other corporations in refusing to donate money to the Republican lawmakers who voted against counting the electoral votes for Biden in the states Trump falsely insisted had voted for him.

The pressure of those two things made Senate Majority Leader Mitch McConnell (R-KY) and House Republican Conference Chair Liz Cheney (R-WY), the third most powerful House Republican, today come out in favor of impeachment. McConnell acknowledged that Trump had committed impeachable offenses and told other Republican leaders he welcomed the House's actions. In the House, Minority Leader Kevin McCarthy opposes impeachment personally, but has decided not to try to lobby fellow Republicans against it, turning them loose to vote as they wish. For her part, Cheney announced she will vote to impeach the president.

Cheney’s statement suggests that part of what is driving the Republican willingness to entertain impeachment is that there will be more coming out about January 6 and Republicans want to dump Trump rather than be associated with him. She wrote: “Much more will become clear in coming days and weeks, but what we know now is enough. The President of the United States summoned this mob, assembled the mob, and lit the flame of this attack. Everything that followed was his doing. None of this would have happened without the President. The President could have immediately and forcefully intervened to stop the violence. He did not. There has never been a greater betrayal by a President of the United States of his office and his oath to the Constitution.”

It is undoubtedly also of great significance to McConnell that the actions of Trump and his supporters in Congress have led major donors to close their wallets. The less money McConnell has to dole out, the less power he has, and the weaker the Republicans’ chances of retaking the Senate in 2022. McConnell wants that spigot of money to reopen.

He would also like to use this moment to get rid of Trump and his supporters from Republican leadership. Trump has led the party to a major defeat and made it so reviled that it has lost the White House and the Senate, defeats for which McConnell blames the president. Indeed, the Trump administration is so reviled that today European officials took the unprecedented step of refusing to meet with Secretary of State Mike Pompeo on a scheduled trip to Europe this week. He was forced to cancel his trip at the last minute.
McConnell may have been announcing his support for impeachment to put pressure on Trump to resign, which would enable Republicans to avoid voting on the issue and head off an irreparable split.

For their part, the Trump Republicans are doubling down. Law enforcement has installed metal detectors for congress members to enter the House chamber, and Louis Gohmert (R-TX), for one, simply walked around it. “You can’t stop me; I’m on my way to a vote,” he told the police officers.

Tonight, by a vote of 223-205, the House passed the Raskin resolution urging Vice President Mike Pence to invoke the 25th Amendment and begin the process of removing Trump from office. Pence had already told House Speaker Nancy Pelosi that he would not do so. In a letter to Pelosi, Pence said, “I do not believe that such a course of action is in the best interest of our Nation or consistent with our Constitution.” He maintains that the 25th should be used only in cases when the president is incapacitated or disabled, neither of which, he says, is the case now. Pence’s statement gave Republicans in the House cover to vote against the Raskin resolution. Only one, Adam Kinzinger (R-IL) voted in favor.

That leaves Congress to move forward with impeachment, which it will do tomorrow. (Today, Wednesday). As of today, five House Republicans have announced they will join the Democrats in support of the measure.

Meanwhile, all eight of the Joint Chiefs of Staff of the military, including chair Mark Milley, today reminded service members of their oath to the Constitution and warned against “violence, sedition and insurrection.” They reminded members of the military that “any act to disrupt the Constitutional process is not only against our tradition, values, and oath; it is against the law.”

“On January, 20, 2021," they wrote, "in accordance with the Constitution, confirmed by the states and the courts, and certified by Congress, President-elect Biden will be inaugurated and will become our 46th Commander in Chief.”
There you are, Mr. and Mrs. America.  And yes, it is a glorious, beautiful, unfortunately very necessary day in our nation and in our nation's history. Oh, and by the way, we are now down to precisely only 7 days left in this President's administration.
Indeed, it is a beautiful, beautiful, very hopeful day. Enjoy.
Posted by Mo Rage at 12:30 PM